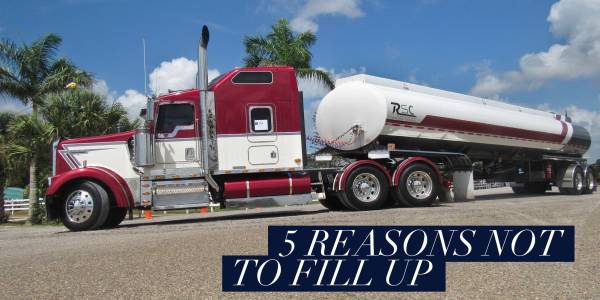 This should be an easy question. It should have a simple answer. But it’s not that simple, and it’s something every truck driver needs to know. If I fill my fuel tanks, how much weight am I taking on? In this article, we’ll start with the most direct answer. Then we’ll discuss the reasons you might be better off to not fill those tanks.

At 76 degrees Fahrenheit, diesel fuel weighs 6.91 pounds per gallon. That’s with normal atmospheric pressure. Most truckers round this up to 7 pounds per gallon, just to make it easier. A Canadian gallon is a bit larger, 4.5 litres vs 3.8 litres American. Figure 8.4 pounds per Canadian (imperial) gallon. For this discussion, we’ll stick to the US gallon.

It’s not unusual to go into a shipper with less than full tanks, only to leave at just nearly the legal limit. If you scaled out at 79,600 lbs, you only have room for 400 lbs of fuel, or about 57 gallons. You may have room in your tanks for another 100 or more, but anything over 57 puts you at risk of an overweight ticket.

Truck drivers often calculate how far they will travel before the next weigh station, then add even more fuel to that 57. The goal is to arrive at the next scale-house right at the 80,000 mark. If the next scale is 180 miles away, and you’re averaging 6 miles per gallon, you’d add an extra 30 gallons to that 57.

Another common assumption is that pretty much any weigh station will let you slide by with an extra 300-400 lbs. I don’t like assumptions, especially when I’m wrong, and I’m assuming they will look the other way.

If your run is only a couple hundred miles, this isn’t a big problem. But if you’re travelling from Wisconsin to Washington, and you’re fuelling every 350 miles, it will slow you down. The fuel stops will also take a toll on your available hours.

If anyone tells you it’s best to buy a little fuel in every state you travel through, they’re just wrong. Through your IFTA filing, you’ll pay the fuel tax on what you burn in that state, regardless of where you buy your fuel. That’s why you are required to track your miles in every state.

It could be that the lower pump price is only lower than another state because their fuel tax is lower. It could also be that a state with a higher fuel tax has a higher pump price, but a lower net cost per gallon.

Know your pump price, minus any discounts you receive, then deduct that state’s fuel tax. That’s the cost you need to look at. Remember, buying more expensive fuel in order to avoid having to come up with a little cash on your next quarterly IFTA filing is just not smart business. It’s that bottom line at the end of the year that counts.

When To Use Winter-Blended Fuel

Diesel fuel is treated for winter temperatures based on geographical location. That means the fuel you buy in Louisville Kentucky could easily cause problems 500 miles north in Green Bay Wisconsin. The winter additives in the southern fuel weren’t designed for the sub-zero temperatures you could be driving into.

The flip-side of this is that the winter additives in the northern fuel could actually reduce your fuel economy. It won’t be as dramatic as the pre-low sulfur days of #1 diesel vs #2 diesel, but it’s certainly measurable.

The bottom line is to be aware of the direction your next load will take you and the temperatures you’re headed into. If it looks like you’re heading into temps 20° or less, consider what lies ahead as you’re burning off fuel.

Two numbers you need to be aware of are the Fuel Cloud Point and the Cold Filter Plug Point. The first is when the wax particles in diesel fuel start binding, making the fuel cloudy. The second, also known as CFPP is when those particles start getting trapped in the fuel filter. Eventually, this gel will shut you down.

That cloud point is always under 20°, but there are variables in fuel that cause fluctuations. The quality of the blend, bio-blends and other factors can alter the CFPP quite a bit.

I found a great piece on this at Mansfield.Energy that really breaks this down into understandable terms. It’s worth the read.

Fuel Receipts Have To Match Your Logbook

Everybody’s running E-logs today, right? Not exactly. If you’re running a 1999 or older truck, you’re exempt. Also, more than a handful of truckers have figured out how to work around some of the new systems.

Just a reminder, Hours Of Service laws are just that. They’re laws. My comments on this topic are in no way meant to encourage or endorse running in violation of these laws.

Back In The Day…

Back in the days of paper logs, most companies only required a driver to match the dates on fuel receipts. If you fueled up on April 1st, your receipt had to say so. If a driver ran the same routes, they learned what truck stops offered hand-written, paper receipts. Just ask the clerk to leave the date blank. Problem solved.

As years and enforcement progressed, more and more drivers needed an exact match of fuel stops on their paper logs. But even then, a driver could fill up just before their 70-hour limit, then continue as far as the fuel would take them.

I’ve had several trucks with 250 gallons or more of usable fuel capacity. At 6 miles a gallon, that truck could easily travel 1,500 miles between fuel stops. A log book could easily reflect me taking a 34-hour break in Rock Springs, Wyoming while I’m cruising home to Green Bay, 1,400 miles away. I might have to sit and wait for that logbook to catch up with me, but I could be sitting at home instead of in Rock Springs.

This scheme came with a cost

Let’s be real here. In the 20 years I’ve been trucking, the climate on hours of service have shifted. Run legal, PERIOD. Honestly, I do miss the days of having more flexibility, and it’s badly needed today. Sadly, trucking companies, shippers and receivers will figure out how to take any flexibility added to the current HOS laws and use it to their advantage, not yours.

A con job could be a better word for it, but nobody understands the hot fuel issue better than OOIDA. Like any other liquid, diesel fuel expands as it’s heated. There are no more BTUs in that heated fuel than when cold. In fact, there are less BTU’s in a hot gallon than a cold one. The problem lies in how pricing is calculated.

When you buy fuel, you’re paying by the gallon, regardless of temperature. The temperatures at the pump have been known to be as high as 114°. This means the hot fuel you’re buying contains less BTUs than the 60° gallon contains.

You can read more about hot fuel and why nothing is being done about it by following this OOIDA link.

Needless to say, there is a weight difference between that 60° gallon of diesel and another at 114°. You would also see some variants in winter fuel and bio-diesel, but that 7 lbs per US gallon figure is a good number to stick with. It leaves just enough room to keep you legal.

There’s a lot to consider when you take on 200 gallons of fuel or more. You also have to balance the decision with what your time is worth. The big trucking companies with their “optimized fuel and routing” systems show little concern for their driver’s time. But you know when it’s better to spend a little more in an effort to save time or avoid problems like being over weight or plugging a fuel filter with gelled fuel. The choice is yours.